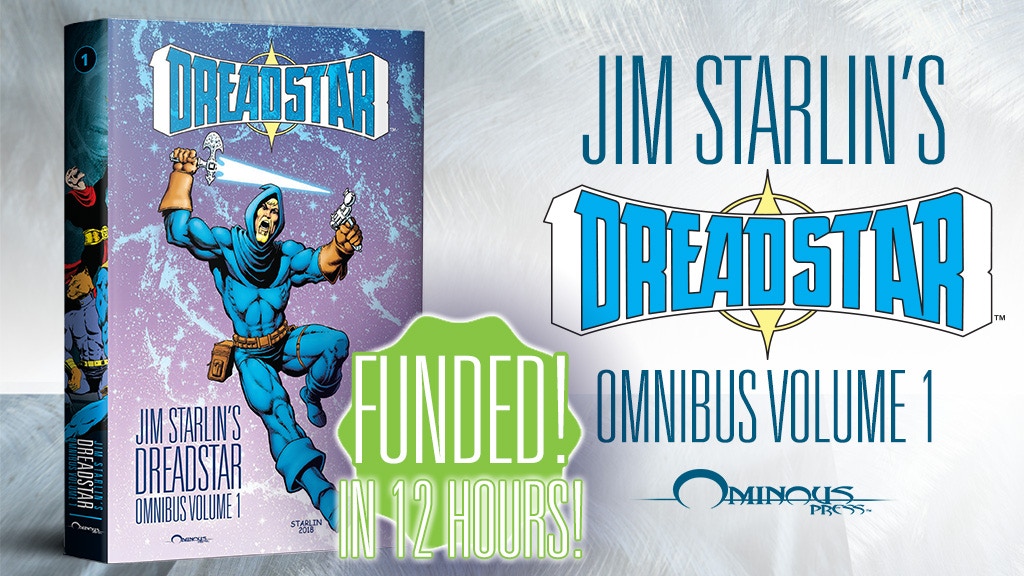 Latest Updates from Our Project:

We finally have definitive news on the Dreadstar statues that were offered as part of this campaign. Unfortunately, at this time we are not going to be able to produce the statues as intended. Considering the limited number of statues ordered, as well as the difficulty we encountered in sourcing a viable production partner, producing the statue is proving to be an insurmountable challenge at present. Our sincere apologies for the situation.

Statue backers have been refunded, and sent a box of Ominous Press goodies as a thank you for their patience and understanding. In the future, we hope to undertake a separate campaign for Dreadstar statues, once we are able to secure a production partner that can meet our needs. We will update you as that process continues.

As always, thank you for your support!

We’d love to have your pledge, and/or shares on social media to help up bring get the project across the finish line. Let’s unleash the Beasts!

We hope this finds you well in these uncertain times. We here at Ominous Press and Creation.Ink are continuing to create, and we wanted to let you know about our latest project.

Written by Ron Marz, drawn by Matthew Dow Smith, and colored by Nanjan Jamberi, the sequel will be a lavish, 64-page oversize hardcover, just like Volume 1. Once funded, Volume 2 will be released in December.

Click this link: BEASTS OF THE BLACK HAND Volume 2: The Viking League on Kickstarter!

Set at the close of the First World War in a world where dieselpunk technology is transforming the world, Volume 1 introduced British secret agent Oswald Rayner as he assassinated the Mad Monk, Rasputin. Rayner is charged with battling the nefarious Black Hand, a secret cabal of sorcerers bent on unleashing monsters upon Europe. Rayner is aided by a team that includes his driver and mechanic, Biffy Dunderdale; French “Hello Girl” Oleda Marchand; and American war hero Henry Johnson.

Having thwarted Maria Rasputin’s machinations to destroy the Versailles peace conference, Volume 2 finds Rayner and his team battling the Black Hand in Eastern Europe, as well as Germany, where the fascist Viking League is rising to power. Meanwhile, a mysterious figure known as the Teutonic Knight has appeared in Berlin, his loyalties uncertain.

Both Volumes 1 and 2 will be available are available via the Kickstarter, with standard covers by Matthew Dow Smith, and limited sculpture variant covers by Paul Harding. Other rewards include collectible, limited-edition, single-issue comics with exclusive variant covers by artists including Matthew Dow Smith, Eric Powell, Mike McKone, Mark Nelson, Meghan Hetrick, and others. Additional variant covers will be announced throughout the campaign by an all-star collection of artists, including Rachael Stott, Tom Mandrake, and more. There are also sculpture rewards crafted by Paul Harding and Creation.Ink, limited-edition prints, and T-shirts.

With your help, we can unleash the BEASTS again!

If you like great action and fun comic books then you'll love what Andy Smith cooked up!

44-pages of fun, two action-packed stories! Want to know more then click on the link. Let's help our brother out on his solo journey!

We hope this finds you well! We wanted to make certain you’ve seen our new Dreadstar campaign, which is live on Kickstater now. The campaign features DREADSTAR RETURNS, an all-new 100-page graphic novel written and drawn by Jim Starlin! This is Jim’s return to the drawing board after a number of years away due to an accident that injured his drawing hand. But after a lot of hard work and practice, Jim is drawing again, producing a brand new tale starring his signature creation, Vanth Dreadstar. And it is classic Starlin!

The campaign also offers the DREADSTAR GUIDEBOOK, the first Who Who-type volume to explore the Dreadstar Universe. Written by comics scholar Robert Greenberger, and checking in at nearly 100 pages, the Guidebook covers all the major and minor characters of the Dreadstar saga, as well as the important locations and artifacts. It also includes rare and previously unpublished artwork.

If you only have DREADSTAR OMNIBUS Volume 1 on your shelf, this campaign is also your chance to get Volumes 2 and 3. Other rewards also include Legacy variant covers of Dreadstar #1 by a bevy of superstar artists, and original sketch covers by artists including Dan Panosian, Rick Leonardi, Darick Robertson, Marc Laming, and more.

The campaign runs until May 10, and has already reached its funding goal, so Dreadstar will definitely be returning! You can pledge here: https://bit.ly/dreadstar

As always, thanks for your support, and stay safe and healthy!